This is how pathetic my life has become: when my husband goes out of town, I live it up by eating brussels sprouts.  Seriously. (Did you know there was an ‘s’ on the end?  No?  Me neither.  I mean, I know they were named for the city, but I always assumed the vegetable was “brussel sprouts.”  Ah the wonders of google’s super-condescending Did you mean brussels sprouts? as if google was channeling the annoying grammar kid in grade school…) 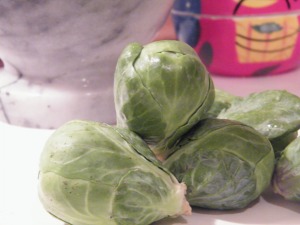 But they’re lovely little nuggets of nutty vegetable goodness and he hates them, or did.  Conventional wisdom (read: the label on the bag when you buy them at the store) suggests popping them in the microwave for a few minutes with a hole cut in the corner for venting, and voila! Delicious veggies!  So here’s a tip: NEVER TAKE COOKING ADVICE FROM A PLASTIC BAG.  Even if it does have 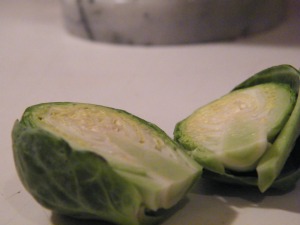 Like any somewhat tough, somewhat bitter vegetable, the key to brussels sprouts is to roast them.  Sweeter roots and tubers like sweet potatoes and beets can be cut thin and survive a quick 20 minute roast and come out just fine, but with brussels sprouts?  You’ve got to roast the crap out of them. 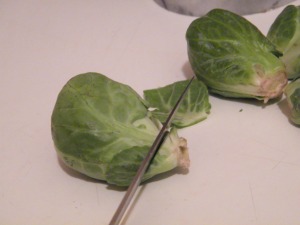 Cut off the ends, 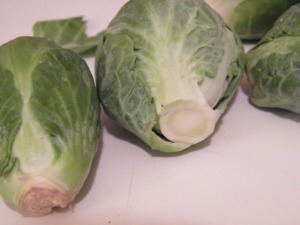 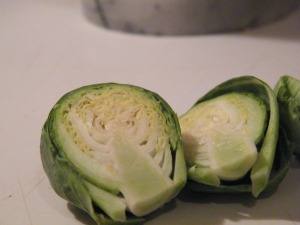 toss with a bit of olive oil, and pop them in a 400 oven for at least 30 minutes.  About halfway through cooking time, shake the pan to toss them around a bit, and then back in they go.  When they’re done, they’ll be absolute mush in the center, which sounds really unappetizing, but what happens is that all the bitterness dissolves away and the residual sugars caramelize in the heat and the mush you’re left with is a little sweet and a little caramelly and a little nutty and tastes awesome with anything with a little strength behind its flavor – red onion, goat cheese, walnuts, steak, or just very nice sea salt.  They’re very earthy when they’re left almost whole like this, and would probably be wonderful smoked. 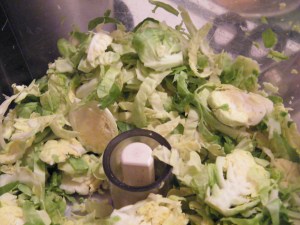 But if you don’t have time for a long oven roast, there’s another secret that we only recently discovered that makes them even better, and way faster and easier: shred them.  If you have a food processor, run them through the slicing blade.  The resulting pieces are thin enough to pop into any pan for a quick saute or stir-fry with whatever else you’re serving, or even edible raw.  I’ve swapped them out for the kale in my raw kale salad with fantastic results, used them in place of the cabbage in a cole slaw (since brussels sprouts are really baby cabbages anyway), and tossed the shreds into a spinach salad with warm bacon dressing for a little vegetable variety.  When shredded, the natural bitterness is not nearly as noticeable, and just lends a little sharpness; if you’re cooking, you’ll get to that sweet nutty flavor ASAP instead of waiting for the slow roast.

A quick recipe:  Throw some sprouts and a shallot through the processor, and into a pan with a little olive oil.  Cook until everything is soft.  Feel free to leave it without turning much, ‘cuz you know I like my bitter things a little burned.  Splash some champagne vinegar on there if you have it, or cooking sherry, or rice vinegar, or apple cider vinegar.  Sprinkle with salt.  Eat by the panful because it really is that good. 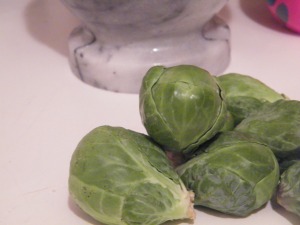 Look for tight sprouts without yellowing or curling on the outer leaves and few spots.  If you’re buying them from the market instead of the store, you may see them in their natural state, which is attached to a giant stalk, which looks bizarrely attractive but is inedible.  If you do buy them on the stalk, you can cut each sprout off with a knife, or just twist and pull each one off – the little stems that sometimes come off too are edible, but will need to be steamed or roasted very well first.  You get a lot more bang for your buck when you buy on the stalk, but a lot more work, and frankly, my fridge isn’t big enough to hold it…so no pics.  Sorry.  When we move to a bigger house and get a bigger kitchen, I swear I’ll buy a giant specimen just for you.

Trim? Yes.  Slice off the bottom brown edge.  Some people say to just put an ‘x’ in the base, but that seems like more work to me and I don’t like tough stems.  Remove any wilted leaves.
Edible when raw?  Yes, but better sliced thin or shredded first.
Worth the price of organic? Apparently not, though I would have thought otherwise.  Organic brussels sprouts are particularly hard to grow, so they’re not that common, and because each little sprout is packed so tightly, they don’t harbor a lot of bad stuff.  So give ’em a good wash and save your pennies.
Best with:  Strong flavors with a little sweetness that can stand up to the bitter earthiness but bring out the sweetness of the sprout – shallots, lemon, soft cheeses, pine nuts, walnuts, bacon/ham/piggies…  Strong flavors that have a bitter edge, like marjoram, turmeric, or even my beloved garlic, can heighten the sulfuric edge, making them taste a little like rotten eggs if you’re not careful.
In Season:  Fall through Spring.
How to Store: In the fridge, in a produce box or loosely sealed plastic bag, they should keep for ten days to 2 weeks.  If they start to yellow at the edges, peel off the outer leaves and eat within the next day or two.