Poor fava beans.  Besmirched by Hannibal Lecter, neglected by most Americans, their fat, lumpy pods looking like just a whole lot of bother.

Don’t get me wrong, favas are a bit of pain in the heinie. (Fun Fact: also spelled hiney!  But not heiny, as I originally thought.  Thanks, dictionary.com!)  As anyone who has read, oh, even one of my posts can attest to, I’m a lazy cook.  I don’t like peeling, trimming, turning, shelling, or barely even washing.  I eat the parts most people toss and if it can all quickly go into one pan, preferably with bacon, and just get stirred around until it looks done, I’m happy.

Not so with favas.

Fava beans (also known as faba beans, fave, broad beans, English beans, horse beans, pigeon beans, field beans – I’m getting the sense that these suckers have been around a while, yes?) take a comparatively whole lotta work.  They’re protected from the elements by not just one but TWO casings – the outer pod and an inner soft shell – and you have to shuck both before you can eat them.  Don’t, ahem, assume other bloggers and cookbooks are being fancy pants and take a bite of the de-podded but still white-shelled bean.  It’s nasty.  Not that I did that.

But the good news is that the whole double-shucking process isn’t nearly as time-consuming as it reads.  The beans pop out of the pods pretty easily, and with a good blanching the worst part of the de-shelling is a bit of vegetation under your nails – which might not even be true if you blanch properly. 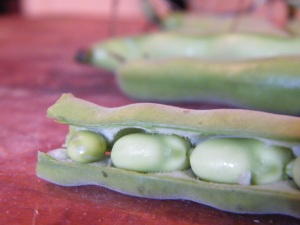 I never have ice on hand, so my ice water is cold tap water, which if you’ve ever taken basic science class, you’ll realize means that as soon as you add hot favas to the water, the whole thing heats up instantaneously and does a horrible job of blanching.  But good news continues!  Because even with sub-par blanching, the beans are still pretty easy to peel.  It just takes time to go bean by bean.

And then!  You get these squat, nutty, oh so green nuggets of delight.  They don’t taste like beans at all, in my opinion, because they’re not little explosions of mealy mush.  (I’m not a big fan of beans, as you might guess.)  The closest approximation is garbanzo beans, but really only in terms of texture, since fava beans have nothing of garbanzos’ astringency.  Fava beans taste like a nut that doesn’t stick in your teeth, a little sweet, a little buttery, and a wee bit ‘green.’  But what they really taste like is Spring.

I don’t know how, I don’t know why – maybe it’s their intense green color, their cute little shape, their inherent freshness since you’re eating them essentially raw – but when you taste a fava, it tastes like a sunshine-y day and a cool breeze.  They were so spring-like that we actually laid out a blanket in the back yard and made a picnic out of our meal rather than eat at the table.  I’m not kidding.

Look for healthy, springy, pale to medium green pods without a lot of brown spots (a few are okay), and in which the beans aren’t bulging out of the pod.  Bulging beans means they’re a bit old and overgrown. (I feel like there’s a pot belly joke in here, but having been pregnant twice in the past 3 years, I have stopped commenting on bulging bellies.)  And then, to the work:

First, de-pod your beans.  There’s technically a string that runs along the back: 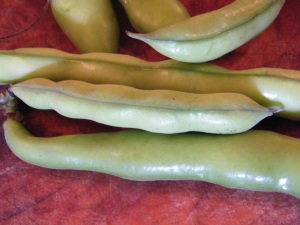 And if you can catch it it will peel right open, but if not, just tear it open.  You’ll find 3-6 beans nestled snug in their beds.  The cushioning looks like a pillow:

While you’re de-podding, boil some water.  When you have your little pile of whitish-looking beans and the water is rolling, toss them in for just 1 minute:

While they’re boiling, fill a bowl with ice water (not just cold tap water).  When the timer goes, toss them in and let them sit 1 minute.  The outer waxy covering should shrivel and pull away from the green legume a little.  Then, bean by bean, remove that outer coating.  On the left, a boiled bean; on the right, the coating removed: 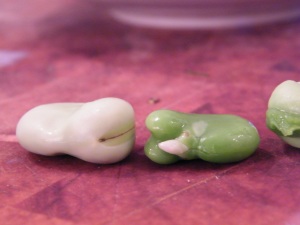 See how green they are?  That’s it.  Now they’re edible.  Some people puree them, some people saute with garlic and lemon (though I find cooking further isn’t necessary), but we chose to make

The Spring-iest Salad that Ever Was Sprung

Slice the radishes into small pieces and shave the fennel as finely as you can.  Mix with favas and and the sausage if you’re using it.   Our fennel was particularly licorice-tasting this time, so we combined in a ratio of about 2:2:1 for radishes, fava beans, and fennel so it didn’t overpower.  Squeeze the lemon juice on top, drizzle with olive oil, and toss to coat.  Sprinkle with salt. 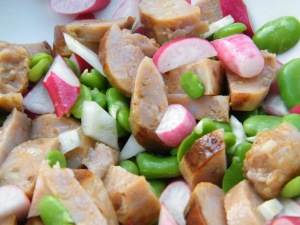 That’s it.  It was awesome.  The fava beans are mellow and nutty and add an unexpected bit of richness of flavor, the radishes and fennel added a little bite and complexity, the lemon dressing and chunky salt added a brightness that enhanced the freshness of all the ingredients.  It was spring in a bowl and was the inspiration for our impromptu picnic – good crusty bread, a few slices of quality cheese, and very cold wine and you had a happy little family, though the toddler just ate the favas and sausage and ignored the sharp little radishes and fennel slices.  I honestly think I’ll leave out the sausage next time, as we really only added it because we wanted to use it up, and though it added a nice savory sweetness, I think the salad would be even springier without it.  Other additions?  Next time I’m adding thinly sliced asparagus, even garlic scapes if I can find them, but in my estimation, the best Spring Salad is one just like this: find the freshest Spring ingredients you can, toss them together, and put down a blanket in the back yard.  And just this once, leave out the bacon.

Peel/Trim? Definitely.  A few sources say you can eat without the second shelling if the beans are absolute babies, but the casing is pretty bitter in anything bigger.
Edible when raw? Sort of.  Blanch to remove the casing, and then they’re edible.  It’s possible to buy them dried like other beans, and then you have to cook them just as you would black, pinto, kidney, etc.
Worth the price of organic? One of the few foods to which I’m going to say Probably Not.  There’s so much peeling and shelling going on here that any pesticides sprayed on won’t make it to your plate.  It’s true that what you’re eating is the seed, so anything in the soil is going to be concentrated in here, so if you’re that concerned, feel free, but if you’re that concerned, you’re probably buying everything organic already.
Best with:  Do I have to say liver and a nice chianti?  Yes, yes I do.  Otherwise, spring vegetables that taste clean, green, and fresh are the way to go: radishes, young garlic, young onion, mint, dill, lemon.  Ricotta would be lovely, even a mild goat cheese, but anything stronger will overpower the subtle, mild flavor of the fresh nutty beans.
In Season: Spring.  In some areas they grow into the summer, but in Southern California, they’re usually gone by late May.
How to Store: In the fridge.  They should keep about a week in their pods.  After blanching and preparing, the shelled favas keep a few days, but rinse in water before using if you prepared them in advance.
Note: There is a potentially fatal disease called favism, that is an allergic reaction to fava beans.  While very rare, it can affect some people of African, Mediterranean, or Southeast Asian descent.