I’ll admit it.  After years of trying, I still can’t get totally into beets.  The first time I had them was borscht, i.e., cold beet liquid mush, the second time I had them was pickled from a jar, and after getting so nauseated from the smell that I had to not just leave the kitchen but the HOUSE to get some air, I was a sworn beet hater.

Beets are, shall we say, an acquired taste.  Imagine, if you will, a clod of dirt that someone has dripped peach juice on.  Take a bite.  That’s a beet. 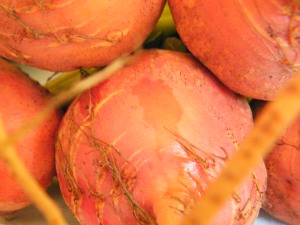 Now the beet lovers out there are going to protest and call them “earthy” and tell me I should roast them, and they’re right.  Roasted beets do become an entirely different thing, sliced into chips and baked at high heat they’re actually better than potato chips (I swear!), but you still have the problem of looking like Lady Macbeth after peeling them and not allowing your toddler to touch them even though they’re FANTASTIC for him because you know you’ll never get the stains out of ANYTHING.

And then I discovered golden beets.  Like massive golden jewels radiating sunshine among the stalls, golden beets solve all the problems of red beets and taste even better.

The flavor is milder, for starters – they’re slightly earthy, but they have a nuttiness to them reminiscent of walnuts, and a mild sweetness like the smell of apples or apricots.  They’re absolutely gorgeous – slice them and they look like orbs of sunlight; halve them and their whitish veins shimmer out like rivers in a golden meadow; wedge them and they look like yellow sapphires just mined from the earth.

The smaller, the sweeter, as with most root vegetables, but golden beets will stay pretty sweet even in softball size, so the rule isn’t as applicable here.  Give them a good scrub

and remove all the root hairs.  If they’re quite young and the skin is quite thin, it’s not absolutely necessary to peel them, but the skin toughens up as they get older (ain’t that the truth!), and even the young ones usually have some rough stuff near the stem, so peeling is usually required to some degree.  Basically, I default to: Peel, and if they’re young and you’re feeling lazy, half-ass the job.  When you buy beets, they’ll always ask if you want the tops off.  Most people say yes.  Most people are crazy.  Before I came to like the beets themselves, I used to get free beet tops from the market all the time – hang around a stall for a few minutes and someone won’t want theirs.  Offer to split the cost and it’s a win-win for everyone!

More on beet greens in a different post, but if you do take them home, chop them off about an inch above the beet part before storing in the fridge – they’ll quickly wilt while they continue to feed the beet.

The two best ways to eat beets, in my opinion, really come down to the two ways to slice beets.  If they’re relatively spherical, slice them as thin as you dare (if you’re fancy-shmancy and own a mandoline, now is when you get your money’s worth) so they resemble potato chips.  If they’re funky-shaped or too small, cut them into wedges. 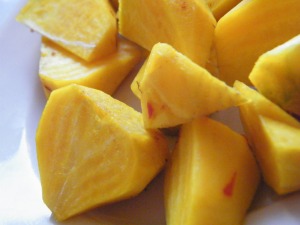 Either way, toss with a little olive oil and spices of your choice – if I’m making chips, I often add garlic powder to the standard salt and pepper; if I’m making wedges, whatever spices I’ll be using in the main dish, or nothing until I decide.  Chips get spread out on a cookie sheet so they don’t overlap, 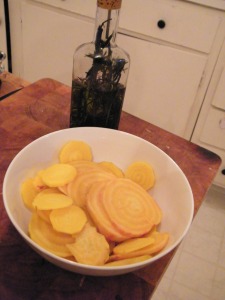 wedges usually go into the toaster oven because I hate to turn on the big guy for one meal, but either way, I line the sheet with aluminum first because I hate cleaning up.  (There’s a distinct theme running through my posts, I’m noticing…I mean, I knew I was lazy, but when you put it in writing repeatedly…yeesh.  In my defense, we don’t own a dishwasher.  Yeah, I don’t think that makes up for it completely either.)  Pop either cut into a 400 degree oven for about 20 minutes.

Bake until chips are crisp or wedges are soft and beginning to blister.  Toss the chips with salt while they’re hot, but they’ll taste great hot or cold.  The wedges can go with anything – side dish, pasta, cous cous.  Cool, they make a really nice addition to a salad.  My favorite dinner with beet wedges:

Want the lunchtime version?  Toss the roasted beets (cooled) with mixed greens (include something a bit sharp like arugula, endive, or even just baby spinach), goat cheese, and walnuts.  Drizzle with olive oil and balsamic.  Same thing, only without the evil carbs.

Peel?  Yes, especially the thicker skin.  The young, thin skin can stay on.  As long as they’re well-scrubbed and no root hairs are left, the skin is edible; it’s just not very tasty.
Edible when raw? Technically…Some raw food types grate them into obscurity or juice them in order to eat them, but I don’t recommend it.  I’ve seen them sampled at the market raw with oil and salt, but if you’re a beet newbie, I’d cook them.
Worth the price of organic?  Not sure.  If you’re eating the greens, it seems to be a good idea to keep it clean, and lettuce, spinach, kale and collards – other similar greens – are all on the “Dirty Dozen” of pesticide-absorbing foods.  But most root vegetables hide beneath the soil pretty well, especially if you’re going to peel them.  If you’re keeping the greens, I’d make the splurge.  If money is tight and/or you’re buying your beets from the grocery store so you don’t even get the option of keeping the greens, I’d probably save my cash and risk conventional.
In season: All year, though most sources say June-October.  I don’t think I’ve ever NOT seen them at the market, though I know from trying to grow them that they like a cold snap.
Best with: soft, mild cheeses to counteract their natural sweetness; nuts (especially walnuts, sunflower seeds or similar) to increase their nutty flavors; sharp or slightly bitter greens – arugula, beet greens, radish tops; almost any herb – garlic, rosemary, thyme, sage quickly come to mind, but others swear by curry, dill or any number of other favorites.  Golden beets in particular, because they’re so mild, really go nicely with almost everything.
How to Store: With greens removed, store in the crisper – leave a bit of stem on top and don’t peel until ready to use, though you can scrub before storing.  We’ve kept them as long as 2 weeks or more, but a week or less is probably a better idea.