I saw these babies at the market a couple of years ago and couldn’t resist taking them home:

So cute!  And they looked great for quick snacking.  Unfortunately, though they were called French Sugar Plums, they weren’t very sweet, and the lack of juiciness was unexpectedly disappointing.  They tasted so nondescript that I didn’t know how to respond – they weren’t bad, but that’s because they weren’t anything.  They didn’t even really taste like plums, just like they were some generically labelled Fruit.

But because I’d bought a whole pound of them anticipating snacks to last us at least a week, I started surfing the Internet for how I could use them up.  They’re also known as Italian Prune Plums, so there were suggestions for turning them into homemade prunes, but that seemed a lot of trouble for a food I didn’t really love anyway.

And then I found The Cake.

Apparently, I’m slow to a whole bunch of trains, because this recipe was published in the New York Times every year for about 20 years, but I only found out about it recently.  But it’s what these plums were made for.  Their tiny little oval shapes wink at you as the syrupy topping settles into the crevices left by their big, fat pits

(you don’t see syrupy topping in the link?  That’s ‘cuz I changed the recipe.  Scroll down.), and the heat of the oven transforms their blah generic flavor into something layered, complex, concentrated with sugar but not overwhelmingly sweet.  In short?  It’s the best coffee cake in the history of the universe.

Except it wasn’t.  I mean, it was clearly delicious and was clearly what these plums were made for (being baked, broiled, roasted or otherwise made delicious by the magic of fire), but I found it a bit dry.  So finally I decided to fiddle and futz, and now, if I do say so myself, it is the greatest coffee cake in the history of the universe.  It’s amazingly easy, moist, beautiful, and easily swappable with apples, pears, or other fruits that are not particularly juicy – I wouldn’t use peaches or overly ripe pears or something along those lines because the juice runs out underneath the seam of the pan and makes you have to clean your oven afterwards.  But feel free to swap out another liquor or flavor of your choice as well – I’m not a fan of orange myself, but I think cranberries or pears and cointreau might be very nice…

Modified Plum Cake  adapted from Marian Burros
1 cup flour
1 tsp baking powder
pinch of salt
14 tbs softened unsalted butter
1 cup sugar (can reduce slightly)
2 eggs
1/2 cup 2% or higher Greek style plain yogurt or European-style yogurt (thicker kinds with no sugar or flavorings added – you could probably sub in sour cream if you can’t find either of these, but I haven’t tried it)
15-20 prune plums depending on size of fruit and your pan
1-2 tbs brandy, amaretto, or other liquor
1 tsp cinnamon for tossing, 1 tsp cinnamon for batter
2 tsp sugar
almond extract (could use vanilla or combination of the 2)
springform pan, lightly sprayed or lightly buttered

Preheat oven to 350.  Halve the plums (over the bowl to catch the juices). The easiest way to remove the pit is to simply cut in half, and twist:

Then remove the pit.

Toss with approximately 2 tsp sugar, 1 tsp cinnamon, splash of almond extract, and generous splash of liquor. Let sit while you make the batter.

Add in flour mixture just until combined without flour streaks. Spread into the bottom of springform pan (it will be very thick).

so flat sides of plums are level with batter. 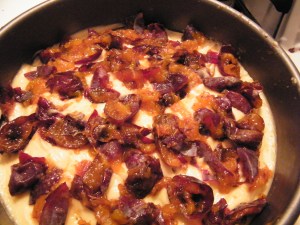 If your plums were overripe and fell apart while you were taking out the pit, that’s okay.  It won’t look as glamorous, but will still look nice and taste just the same.

Spoon remaining syrup in bowl over the top of the cake.  Bake at 350 for 40-50 mins or until set in the center and pale golden. Separate the edges from the sides of the pan with a knife while the cake is still hot and let sit for about 5 more mins before removing the sides. Serve warm or room temperature. 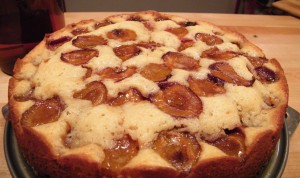 For French Sugar/Italian Prune Plums:
Look for small, oblong, slightly plump fruits.  They should have a little bit of give when you squeeze them, but not be soft. Wrinkled skin means they’re on their way to prune-town; too soft means you’ll definitely need to cook them (but these should really be cooked when fresh for best flavor anyway, and if you’re making cake or sauce, the wrinkled ones will plump right up with a little liquid…)

Small bruises and brown spots can be easily cut out; large scales are a bad sign.  The fruit is too small to save when it gets a large blemish. They don’t smell like much of anything when ripe -at most, a slightly acidic, plum-like scent.

Peel?  No.
Edible seed?  No.  It’s a stone fruit.  Less ripe plums will actually pop off the pit very nicely; as they start to overripen they will hang on, so stick with fruits a little on the firmer side if you want them to look pretty when pitted.
Edible when raw?  Yes.  If you’re just eating them plain, let them ripen a little more so that you get the maximum juice possible.
Worth the price of organic?  Probably.  Imported plums are high on the lists for pesticide use, though domestic aren’t bad.  If you don’t know where yours come from, I’d err for organic.  If you know your farmer, you could probably get away with conventional.
In season: Late Summer into Early Fall. (In L.A., all the way into early January.)
Best with: Heat.  Cook them to concentrate the flavor and bring out the juices.  Otherwise, cinnamon, nutmeg, almond, vanilla, cream (and creamy substances – yogurt, sour cream, pudding, etc.), and orange all go nicely for sweet uses.  Because of their small size and subtler sweetness, they’re also ideal for use with dark meats or game, like chicken thighs, rabbit, lamb and duck.
How to Store:  In the fridge, they’ll keep as long as 2 weeks or more.  If they start to shrivel and get prune-looking, they’re still great for baking though less tasty for eating raw.