There’s something so quintessentially farmer’s market-y about herb stands.  With their rows and rows of woody, leafy, flowery bunches, the scents mixing and wafting down the lanes, that absolutely evokes some hippie fantasy of strewing my front stoop with fragrance, medieval-style, and hand-crushing leaves into a peaceful cup of herbal tea which I will then sip on my hand-hewn wooden rocker while I watch the sun set over an uninhabited landscape. 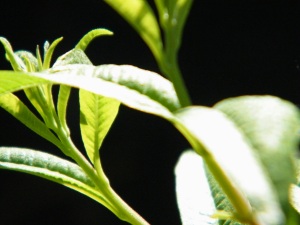 But alas, I live in Los Angeles, so there’s no such thing as an uninhabited landscape, and frankly, I think herbal tea mostly tastes like lawn clippings.  Or punishment.  But I still love herbs – fresh ones and dried ones and flowering ones…  I grow them by the untended bunches, and then forget to use them in cooking because, let’s face it, they’re in the back of the yard that we never cut so I’d have to hike through calf-high grass to get to them, and I never remember I want to use them until I’m cooking dinner at ten o’clock at night (we keep odd hours in our household) so we’re also looking at slogging through dew, spider webs, and possibly encountering a pile of dog poop along the way.  Needless to say, I end up using my overgrown plants mostly as decoration, and annoyingly enough end up buying my fresh herbs.

But I was determined to find some more uses for the plants in my yard, and I started with lemon verbena.  All I knew about it when I planted it is that it smelled lemony (natch) and it would grow well in our arid climate.  And it’s in my soap.  As a result, frankly, it smells kind of soapy.  But I think that’s just me. 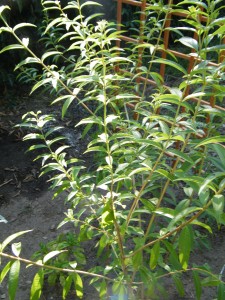 This is actually an older picture. It’s now tied back with zip ties because it’s taking over the entire yard.

Well, grow well it did.  What started as a tiny little herb in a 4 inch pot that I was pretty sure wouldn’t last the month because I am a HORRIBLE gardener has become a tree threatening my tomatoes (the only thing I ever grow reasonably well.)  So I’ve got to use it for something.

If you’re buying it at the market, they’ll sell you a few small branches rather than the jungle that I own, but the first thing you’ll probably notice is that the leaves are sticky.  It’s weird.  They’re not sticky like honey, they’re sticky the way I imagine Spiderman’s hands.  And that proves I’ve lived with a nerd too long.  But it’s true!  They have fine hairs or something covering each leaf so they grip.  This is annoying when you’re trying to separate the leaves, but really really nice for the recipe that follows.

The leaves are pale to bright green, long and thin, and a little on the tougher side, as herbs go, so you’ll want to infuse them in something (tea, oil, vinegar) or chop them up small – they’re not particularly fun to chew, though they taste fine.  Though they smell almost overpoweringly lemony and sweet, the taste is actually slightly bitter and green with mere lemon overtones.  Imagine lemon zest if you also got a little pith in there.  It’s not a bad bitterness, just be forewarned if you’re expecting a lemon substitute.  It’s not.

But it’s lovely for an unexpected hint of lemon.  We added some to a rosemary pesto to give it a slight zing (recipe to follow with Rosemary post), but our favorite use for it (other than cocktails…yum!) was with salmon.  The grip of the leaves allowed us to layer them on top of a very nice fillet, bake/broil it quickly in the toaster oven, and voila!  A very, very quick meal that looked gorgeous and tasted very sophisticated.  The lemon verbena added a hint of citrus without blasting the fish with acidity, and the slightly vegetable flavor of the green leaves added a complexity that cut through the meatiness of the fish – though I think they’d work just as well if not better with a lighter fish or even chicken to play up the lemon flavor even more.  Next on the lemon verbena experiment train?  Lemon Verbena Sorbet.  I’m very excited, but also quite afraid it’s going to taste like old soap.  Anyone tried this before?

Press lemon verbena leaves (sticky side down) in single layer on salmon fillet.  Feel free to place them prettier than I did.  Drizzle lightly with olive oil to protect the leaves from burning.  Bake or broil at 400 until fish is just barely cooked – it should be opaque pink rather than glassy in the thickest part, or flake easily with a fork.

Remove from oven, sprinkle with sea salt, and let sit 3-5 minutes to finish cooking.  If you prefer a more lemony flavor, squeeze half a lemon on top before serving.  You can eat the leaves if you like, or peel them off as you eat.

Parts Used? Mostly leaves.  The flowers are supposedly edible also, I just haven’t found anything on using them other than in teas.
Worth the price of organic?  I always think herbs are worth the price of organic since you’re using them in their raw form, often as an addition just at the end which means nothing is getting cooked out (which I guess makes no sense at all, but it’s my gut reaction), and sometimes in relatively large amounts.  If you’re drying them, all their properties are getting concentrated, which makes me even more inclined to go organic.  But it’s not like they’re on the Dirty Dozen or anything, so, you know, go with what makes you happy.
In season: Summer, though all year in warm climates.
Best with: fish, stone fruits (peaches, nectarines, cherries), sugar, infused in anything liquid that you want to smell like lemon (sugar syrup, oil, vinegar).
How to Store: Place the stems in water like flowers, or store wrapped in a damp paper towel in the fridge.  Cut branches don’t last long – maybe 2 or 3 days, and get woodier as they dry out, so use quickly.