Alright, so an avocado isn’t the most exotic food to start a page called “Strange and Yummy,” but when you grew up with your vegetable choice of frozen peas, frozen corn, or the more mysterious frozen mixed vegetables – consisting of frozen peas, frozen corn, frozen carrots, and the dreaded lima bean – an avocado was a revelation.  Other than pre-sliced on my California Turkey sandwich at Au Bon Pain, I don’t think I saw an avocado in the flesh until I actually moved to California at the age of 20.

If you’re an avocado newbie like I was, you might be wary of their alien bumpy skin, afraid of their fatty reputation, or worried about what occasionally appears to be green goo oozing out of the sides of the sandwich.  You shouldn’t be.  An avocado is nature’s mayonnaise.  Well, okay, if you hate mayonnaise, you might not like an avocado.  A ripe avocado is silky and almost eggy in its richness.  If you splash it with fruit vinegar you’ll notice that an avocado is technically a fruit, not a veg, but an avocado really shines with fresh garlic, ripe tomatoes, shellfish like crab and shrimp – especially with a sharp acid to counter the smooth, slightly sweet avocado, like a splash of lemon, lime or balsamic vinegar.  An avocado is equally at home mashed into a guacamole and served with chips or served in a crystal martini glass filled with fresh ceviche, in California rolls, in salads, and divine in a BLT.

Okay, it’s definitely weird that a fruit can be fatty.  That just seems…wrong, doesn’t it?  I’d think it was unfair somehow, but the nice part at least is that at least avocados are full of the good kinds of fat – you know, the kind that gives you boobs instead of love handles.  Wait, that’s not what that means?  Oh.  Anyway, it’s full of yummy yummy good fat and lots of vitamin E, which doesn’t show up in tons of places and is absorbed best with food instead of supplements and is super good for you but now I forget why because all the knowledge on nutrition I used to have memorized has been replaced with versions of the Alphabet Song.  The perils of having a toddler.

So what to do with it?  First, you’ve got to know what to look for.  A ripe avocado should have a little give when you squeze it; if it’s soft or actually squishy, it’s overripe.  It might still be good in something mashed into oblivion, but it will be too squishy to holds its shape in anything else.  Don’t squeeze too hard or too obviously though – ripe avocados actually bruise pretty easily, and sellers don’t like people mushing up their produce.

Avocados start out with bright green skin (some varieties are quite smooth, most regularly available kinds are bumpy) and turn brown as they ripen.  Again, too brown and it’s too ripe.  A little hint of green is a good thing to look for unless you plan on using it as soon as you get home.

Okay, you can’t really see it, but I know it’s there and it hurt like a sonofabitch when I stabbed myself with the tip of the steak knife.  I never use the right knife for the job, by the way.

The inside will be greener towards the skin, paler towards the pit, and will usually get a little yellowish when it’s really ripe.  If it’s hard – not apple hard, even just green-tipped banana hard – it’ll be bitter and gross.  You want it soft and creamy – if there’s any separation of layers or brown spots, cut them out and use the rest.  See these?

That’s separation.  This guy’s getting close to guacamole time.

Something I just discovered from a grower this fall?  You can keep avocados in the fridge to stop them from ripening.  I know, I know, you can do that with almost everything, but I’d always heard avocados were counter fruit.  Not so!

You can use the sharp tip of a knife to jab the pit and pluck it out – envisioning some enemy’s eyeball if it makes you feel a little more badass when making a salad – but I’ve got issues with knives slipping away from me (see nonexistent scar above), so I like to sort of wrestle it out with a fingernail even if it mangles the pretty indent a bit. 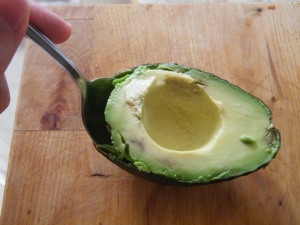 Use a big spoon to get between the thick skin and the avocado flesh and take out the whole half at once, then slice, dice, julienne or mash to your heart’s content. 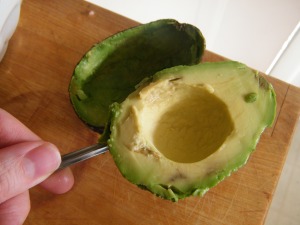 So now to the yummy part…Yay!  I love avocados.  I could eat them almost every day.  I personally don’t like them even the least bit warm – maybe someone out there has a recipe that uses them cooked, but I haven’t seen one – so I don’t even like to put them on top of something like an omelette until it’s already on the table.  My favorite way to eat them is the simplest: cut one avocado and one tomato that’s roughly the same size into roughly the same size chunks.  Add a little raw red onion if you’re feeling snazzy.  Drizzle with balsamic vinegar and maybe the tiniest bit of olive oil if you want more of a dressing, sprinkle with salt and garlic powder and enjoy!

Except once you’ve had farmer’s market tomatoes fresh from the sun in summer, grocery store tomatoes in the dead of winter are pale pink lumps of tastelessness, so instead I’ll be eating today’s purchase in my secret non-dairy tuna salad recipe:

Mash half of one ripe avocado.  Drain one can water-packed tuna and mix together.  Add a splash of lemon juice and some garlic powder if you’re more adult-like, or a teaspoon of pickle relish if you’re a traditionalist.  Voila!  Tuna salad without the mayo.   I had some lovely pics of it piled elegantly on crackers, but when all is said and done, well, tuna salad, even with avocado, looks a little like pinkish mush.  And I accidentally deleted them from the camera while they were downloading.  But trust me, it tastes delicious.

This is how I get my son to eat avocado, by the way – he used to love it raw when he was just starting solids, but now he wants nothing to do with it, so I have to hide it in tuna salads so he gets that precious vitamin E.  What’s that for again?

Peel? Definitely – skin is inedible.
Edible seed? Nope.  Pit it.
Edible when raw?  Definitely.  At its best.
Worth the price of organic?  Not really.  Their thick skin protects them from absorbing most pesticides.
In season: Haas avocados (the most common kind available) from January through fall in California.  Since they’re a more tropical fruit, they’re usually in season somewhere in the world all the time.
Best with: shellfish, garlic, cilantro, tomatoes, red onions
How to Store: A heated debate, especially when cut into, which we’ll get into another time.  Whole avocados can be stored in the fridge to make them last longer or on the counter to ripen.  Once ripe, store in the fridge for two days to a week.  If you overbought, you can puree the ripe flesh with a squeeze of lemon or lime juice and freeze for up to five months.